Click here to find out about our latest project - STAGE (Sentitising Through the Arts for Gender Equality)... 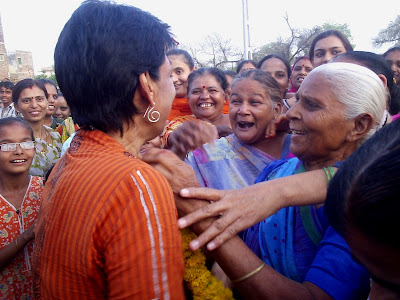 The work in using the arts for behavior change began at Darpana in the 1960s. Darpana’s puppeteers started working with the central Ministry of Rural Development in teaching village women the use of a smokeless stove. The theater department created a play called Ma to rally people to the war effort. Mrinalini Sarabhai, in a radical departure from the spiritual core of the classical BharataNatyam, used the style to talk of the horror of dowry violence. Over the years two departments were established to focus the work of using the arts for change, Dapana for Development in 1980, and Darpana Communications in 2001. In addition in 2009 CRANTI (Citizens Resource and Action Initiative) was formed to give practical guidance to citizens to use the laws and tools available to them to fight their own battles, and to train people in the use of the Right To Information act to solve daily problems of access and justice.

During the last three decades, these deapartments have worked on over 45 projects all over India, reaching out to over 12.5 million people. Our work has been in areas ranging from public health, women’s empowerment, gender issues and education, to the environment, human rights, communal harmony, good governance, citizens’ participation in democracy, race, gender and disability. Through the use of television and film, theatrical and street performances, quizzes and debates, puppets and board games,  we have been able to effectively talk about a range of sensitive issues from women and violence, to religious intolerance, the environment, human rights, corruption and justice.

Approach 1- Peer Education and Training: Selecting youngsters from the target community and training them to become actor-activists and communicators to work as insiders in the community
Approach 2 – Training Local Folk Artists: Selecting folk performers from the target community and training them as activists. We help them create new performances in their own style and then send them back to the community with particular messages or learning.
Approach 3 – Street Theatre Intervention: Training actors, dancers, puppeteers, musicians to become actor-activists for specific messages to specific communities.
Approach 4 – Performances at Mainstream Venues:Darpana’s professional performing group creates specific performances to sensitize or bring to the table mainstream issues to mainstream audiences or for specific groups like IAS officers or Supreme Court judges.

Levels of intervention: D 4 D works at different levels. Using approaches 1, 2 and 3, it intervenes at the grassroots level in urban and rural areas, reaching out to the very communities that require behaviour change. Using approach 4, it u targets theatre going audiences, high school and college students, conference attendees, and policy makers among others. With decades of international performance experience D 4 D’s interventions make for compelling entertainment and persuasive behavior change communication.

D 4 D works with research agencies to conduct pre and post project surveys to identify the issues and needs of specific communities and to measure the impact of performance interventions. Statistically significant results indicate the high efficacy of arts as communication for change.

Projects at a glance:

1. Nari Ki Chaupaal – Women’s Health (Gujarat, 2014 -15) (approach 3: street theatre intervention)
Funded by the National Mission for the Empowerment of Women (NMEW) set up by the Ministry of Women and Child Development, Government of India, this project is in collaboration with Indian Institute of Public Health as our research partner. This project aims to assess the impact of seven street theatre interventions (including Boal interventions) for health education in avoidance of many health issues including maternal mortality due to poor nutrition and lack of basic hygiene, monitoring during pregnancy and unsafe home births, neo-natal care and breast feeding, inoculations, clean drinking water and hand washing before cooking and eating, general nutrition and dental hygiene. The target audience is pregnant women and women in child bearing ages, new mothers, neo natal and older children and adolescent girls.

Impact: The impact of this project is going to be evaluated by our research partners, the Indian Institute of Public Health, Gandhinagar, upon completion of the interventions. A baseline survey was conducted before the theatrical interventions began.

2. ChaabiKhushiyon Ki 1 – 2 (Jharkhand) – Family Planning (2011) (approach 2: training local folk artists)
As a part of a project by the John Hopkins University Center for Communication Program (JHUCCP) and USAID which deals with the issue of family planning in the state of Jharkhand, Darpana for Development conducted workshops with folk artists of this state and developed scripts for them to give 150 performances on family planning in a total of four districts, namely, Simdega, West Singhbhum and Giridih the first phase, and Gumla district in the second phase. This project focused on the “sambhav” voucher scheme in the district, and is considered to be one of the most successful projects in behaviour change communication in this area. For a video on this project, click here and here.

Impact: The 150 shows in three districts of Jharkhand reached over 36000 people. One of the most successful projects of the USAID in Family Planning.

3. Peer Educator Projects – 1 and 2 (2006 -2008) (approach 1: peer education and training)
In project 1 and 2, fifty peer educators from Valsad District, from Surat and Baroda districts in Gujarat were trained in performing arts, games for education, developing communication skills to communicate messages on health and hygiene including pre natal and anti natal care, care of the pregnant mother, HIV and the need for the use of iodized salt. The Peer Educators performed over 40 times. The project was conducted for UNICEF.
Impact: The districts recorded high registrations for the Mamata Divas, greater enrolments of girls in schools, greater awareness about the use of protection during sexual intercourse, and delayed marriages (in areas where the age of marriage was below the legal age).

4. Parivartan (1995-1998, 1998-2001) (Approach 2: Training local folk artists):
This long running project for tribal women covered a wide scope of issues that related to their well being, health, education, social position, family welfare and their ability to make life choices especially concerning family size. Funded by the McArthur Foundation, this project has been Darpana’s biggest and one of the most successful projects. As a part of this project, local folk artists of adivasi tribal communities from Banaskantha, Gujarat were trained to be actor-activists. Using their own beliefs and myths creatively, these artists performed in their communities. Because of the huge success of this project, Sarpanches from another group of villages came forward and this project was extended to a total of 100 villages, and went on for a period of 7 years.

Impact: Even today the effects of the project are in evident in their not having been a single case of witch hunting amongst the project villages (common around the area); their being a consistently high enrolment of girl children in schools (some villages reported 100% enrollment); there being no return to alcoholism in the concerned villages; a total ban on marriages during the monsoons, a ritual which used to waste a month of the crucial sowing period.

1. Sita’s Daughters (1990-2005, 2013) (approach 4: performance at mainstream venue)
Sita's Daughters is a hugely successful one-woman show telling the stories of some of India's bravest women of yesterday and today, women who refused to give in to the pressures around them, women who questioned the world and its values. It was originally developed in conjunction with women activists and groups like Jagori, to include subjects that they found difficult to talk of or get across. The issues dealt with in this performance are: patriarchy’s use of myth to denigrate and repress women (by reinterpreting mythology form her perspective); rape and the use of caste and authority to terrorize the survivor; changing our perspective from a male to a female or neutral one; women and the environment; women and justice; the need for women to change their own patriarchal mindsets.
Impact: This performance was a compulsory viewing for all the judges of the SAARC countries, and has been included in the syllabus of several universities in the USA and worldwide.
VIOLENCEwrite up of sonia’s project on violence in schools?

Video links to our past projects: